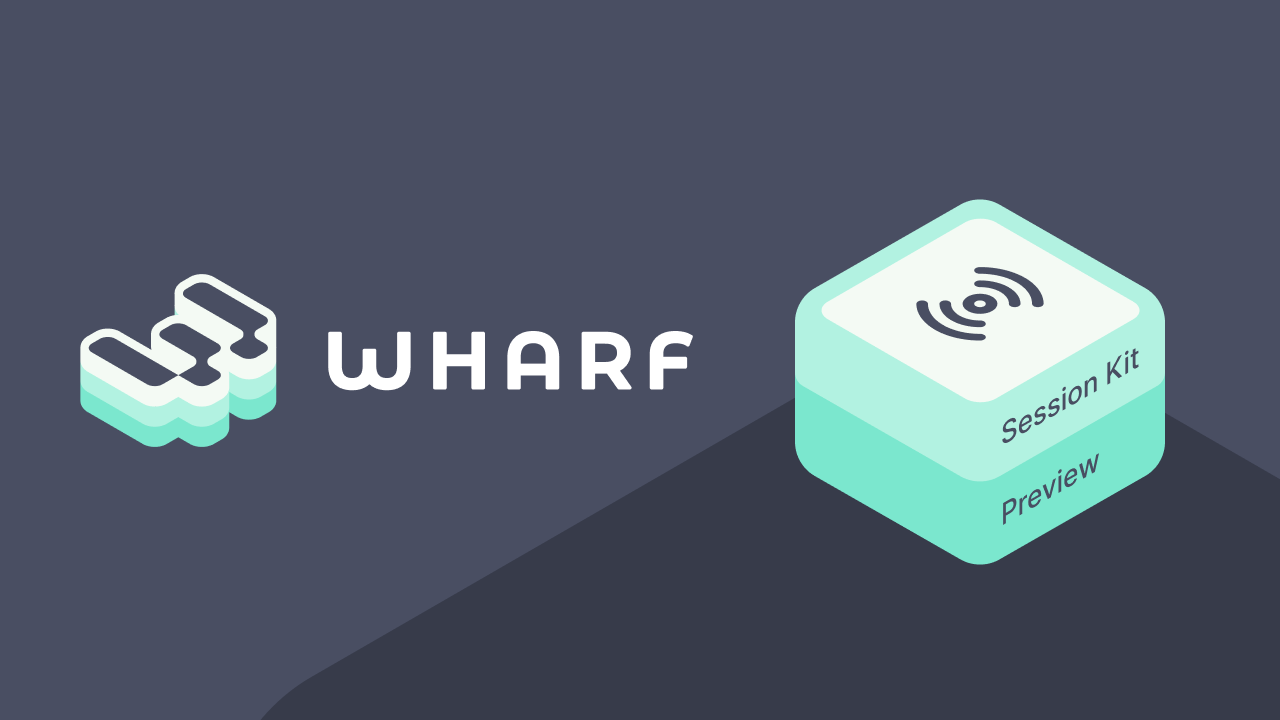 Wharf is a collection of Software Development Kits (SDKs) for developers working on Antelope applications using JavaScript. This article gives a preview of the upcoming release of the Session Kit, one of the major components in the Wharf product collection. This kit aims to provide the tools required for developers to interact with an Antelope-based blockchain.

Please note that this article contains a “Technical Preview” using an early release of Wharf’s Session Kit. This article was written in early 2023 using @wharfkit/session version 0.1.1. Everything within this article is subject to change as the code matures. Please refer to the official documentation (when available) on WharfKit.com for up-to-date usage instructions and information.

With the introduction of the Session Kit, our goal is to create a developer experience that feels similar to what they’d expect from other web technologies. A “session” is a technical concept in development that represents the connection between an authenticated device and a remote application server. When a user authenticates against an application server, a session is established which allows further actions to be performed by a specific device.

During the development of Wharf, we decided to adopt the concept of sessions and apply it to interactions with Antelope-based blockchains. This provides new developers with a sense of familiarity in order to ease the adoption curve.

The Session Kit does this by changing the mechanics under the hood, while still retaining similarities to what is expected in a Web 2.0 world. The authentication step is no longer always required, and instead each session is capable of providing the means to generate transaction signatures, whether that be directly by the Session Kit or by connecting with an external wallet.

The kit at the time of writing is made up of 3 major components, each representing a different aspect of Antelope-based application development.

The core of the Session Kit is named after the component itself and offers itself as a factory class. This allows developers to easily produce Session objects of various types for different uses. The factory is triggered using the login method that utilizes authentication against external wallets. The result of this call returns an appropriate Session object that is ready to use within an application for a specific device.

Developers working with the Session Kit will primarily be working with individual Session objects in their apps, whether crafted by hand within an application or by the SessionKit factory methods. A Session represents the connection between a device and account on an Antelope-based blockchain. These objects offer a transact method that allows actions to be performed on the blockchain by the account it is associated with.

Both the SessionKit factory and the Session instances are capable of accepting custom logic in the form of one or more Plugin packages.

Additional types of plugins may be added in the future as additional needs are identified.

In an effort to highlight how these components work in these early versions, the rest of this article will show how they can be used as of version 0.1.1. Development of this early release has primarily focused on the Session instances and the various uses of the TransactPlugin architecture.

This article will also focus on manually creating a Session rather than using the SessionKit factory methods to create one. As of this writing, no external WalletPlugin packages have been released and no user interfaces have been made available within the SessionKit for user facing applications.

These usage examples showcase methods developers would typically see included in backend services, such as bots or scripts. It is anticipated that usage within user facing applications will be similar.

In order for an application to interact with the blockchain, it will first need to create a Session. To do so, the developer would first need the information to set it up, including:

As of version 0.1.1 of the @wharfkit/session library, in practice this would look like:

The value returned by running this code is a new Session object which can now be persisted and used throughout an applications codebase. The session can be used to interact with the blockchain using its transact method.

The transact method’s goal is to take a smart contract action or full transaction and execute it. This method requires a single argument compatible with the TransactArgs type, which contains information about the action(s) that should be performed. This information can be passed as a single action, an array of actions, a full transaction, or an EOSIO Signing Request payload.

As of version 0.1.1 of the @wharfkit/session library, passing this parameter as a single action would be:

In the above example, it defines a single action that executes the transfer action on the eosio.token contract. It specifies that the intent is to send 0.0001 EOS to the wharfkittest account from the wharfkit1131 account with an empty memo.

This action is being passed into the transact method call on the Session object on the last line, which facilitates the creation of the signature and sending the transaction to the blockchain.

The response value returned by the call is a TransactResponse which contains all the relevant information related to the transaction, including:

If any errors occur during the transact call, an exception will be thrown containing information about the failure.

Utilizing a TransactPlugin within a transact call

Any developer experienced in application development on Antelope-based blockchains will be very well versed with the design paradigms of the Session Kit that have been discussed so far. To highlight the additional benefits that the Session Kit brings, we must now shift our focus to the Plugin architecture.

This feature helps differentiate the Session Kit from previous solutions by providing additional flexibility and customization. Plugins offer an opportunity for developers to hook into many of the predefined processes within the Session and extend its capabilities. The Session makes use of the TransactPlugin type. A TransactPlugin can register custom logic at 4 different points in the transact flow, before and after the sign and broadcast phases.

In this example, the script is now going to utilize a Resource Provider plugin, one which analyzes a transaction to determine if the authorizing account requires network resources to perform it. The source code for this plugin can be found here:

Using the same code example as above, the code just needs a slight modification to include a plugin. As of version 0.1.1 of the @wharfkit/session library, the plugin would be passed in during the creation of the Session as follows:

Each time the transact method of this session is called, the ResourceProviderPlugin would be able to act upon the requested transaction and perform its custom logic.

Under the hood, the ResourceProviderPlugin is analyzing the transaction itself before it’s signed (using the beforeSign transaction hook) to ensure the account has the appropriate network resources to successfully execute. If the account does not have sufficient resources, it has the potential to modify the transaction to include additional actions to ensure it is accepted by the network.

This is just one example of how plugins can be used to ease the development burden on developers and enhance the user experience. Plugins can either be created exclusively for a specific application or by the community of open source developers for public use. The goal with this plugin architecture is to provide a framework for developers to create and share reusable code and prevent developers from having to reinvent the wheel.

The state and future of the Session Kit

The Session Kit is available now as an early release and is available on npmjs.com. If anyone would like to try it out in a backend project today, simply include it in your project using either npm or yarn.

Its capabilities at the time of this writing are very limited and subject to radical changes, we only advise using it for development and experimentation purposes.

Over the coming months, the Session Kit will continue to evolve based on our current plans and feedback collected from the developer community. It is anticipated that the following features will be added next:

While the Session Kit is still not ready for production applications, hopefully this article has outlined the benefits that it already provides. As development work continues, it will provide even greater benefits to developers building on Antelope-based blockchains.

Feedback and collaboration from the developer community is always welcome. If you’d like to adopt and start using the Session Kit to help guide its development, please give it a try.

To communicate with Greymass and other developers involved about this project, we encourage you to reach out on one of the platforms listed below: